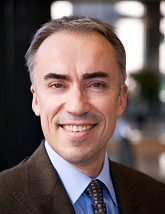 Policy Committee Chair, Mr. André Valiquette is a voting member of the National Executive Board (BEN) of the Conservative Party of Québec.

He chairs the committee responsible for preparing the political content of the Party, in particular the notebooks of proposals for votes at National conventions and General councils as well as, in collaboration with the leader, of the Party platform. He is in charge of national consultation tours.

Mr. Valiquette is the representative of the vision of the Party and second media spokesperson, after the leader.

The Committee Chair acts strategically, emphasizing long-term vision, proactive leadership on critical issues and developing policies that will define and guide the ongoing work of his Commission. It must establish the objectives of the commission by formulating or approving its policies, programs and formulating and approving political promotion campaigns.

With a master's degree in Canadian history, Mr. Valiquette was a journalist at CBC Société Radio-Canada before pursuing his career in academia, where he was responsible for media relations and speechwriter. From 2007 to 2009, he was Director of Communications at the Montreal Economic Institute (MEI).